About how the sturgeon feeds in the wild and the function digestive system is unfortunately very little known information in literature. If such information exists it is extremely difficult to access. Therefore the only way I could learn more about the feeding and the food composition of these fish was harvesting the intestinal content with noninvasive methods.Digestive Sturgeon System

By participating in the operation of fishing in 2004 – 2005 legally organized for other fish species in the Danube Delta and releasing sturgeons unwittingly caught in fishermen’s nets we could harvest intestinal content from over 30 sturgeon that were in their first or second year of life. Over 70% of these specimens were of the Acipenser ruthenus species. The sampling was done through abdominal massage and collecting faeces. The results were not positive in all cases because during immobilization in the fishing nets, the fish eliminated their feces in the water due to the agitation. Given the advanced stage of decomposition and due to feces coming from the last part of the intestine called the “bottom”, it was not possible to identify the species ingested while feeding very accurately. It is certain that in the feeding process the sturgeons ingest a relatively large amount of mud and sand from the bottom of the water when they ”burrow” for food. The sturgeon feces abound in parts of the exoskeleton from ingested aquatic organisms that can not be digested, only partially. About the digestion and absorption we know that it is the process by which food (the nutritive substances) is reduced to a primary level in sufficient measure, to be absorbed in the digestive system and then transferred into the bloodstream.Digestive Sturgeon System

In general it is known that proteins are hydrolysed into amino acids or polypeptide chains by the pancreatic juice. Carbohydrates or Hydrocarbonate, even if they are in small quantities, are converted into simple sugars while the fats are converted into fatty acids and glycerol. Materials which are not absorbed are undigested and are referred to as feces.Digestive Sturgeon System

Fish in general (other than sturgeon) can digest up to 100% of the glucose and 5-15% of materials containing plant fiber. Digestibility in our case for proteins and lipids is somewhere between 80% and 90%.Digestive Sturgeon System

Without mistaking too much we shall take as a reference study the one made by Smith and Lowell in 1973 with reference to the overall and cumulative digestibility in the digestive system based on two types of food with different protein values​​.Digestive Sturgeon System

Since there is no mention if these portions are diurnal or nocturnal and how common sense leads us to believe that fish need a period of rest, so they do not feed, I could be wrong by only feeding them during the day and thus concentrating the density of diurnal feeding space of 16 hours a day.Digestive Sturgeon System

From research done personally and other credible sources (fishermen with old payrolls in the Danube Delta that have already caught hundreds or thousands of sturgeons when their fishing was legal, declaring that sturgeon fishing efficiency is higher during the night) we found that sturgeon fish are more active at night than day, being constantly in search for food. It should be mentioned that many of the aquatic mollusks, shrimp, or small fish or larvae, that the sturgeon feed on in the wild are slower and are even at rest during the night. So we feed the fish in cycles evenly distributed during the 24 hours. If we had a unit of culture with its surface exposed to the sun and with a vegetate mass density, the feeding at night and especially the one in the morning would have been difficult due to low oxygen content at the end of the night.

Suppose that in the natural environment the ratio between the plant mass and biomass of the fish is in favor of the plant mass, then the oxygen consumption is less than compensated by the production of natural aeration in the water-air contact film. It is very likely that these fish know when to eat and when not to or when to reduce the amount of food ingested and therefore successfully face different situations in which the amount of oxygen is reduced. Also, in most fish farms, the fish are often fed only during the day for reasons related to alternations of night and day cycle of wakefulness/sleep of the staff that feed the fish. But this does not concern us because in our case the feeding will be automatic.

Returning to the statement widely presented above shows the following : The stability of a system is given by the balance between the total amount of inputs and outputs, including all internal processes of transformation. In other words say MASS BALANCE LAW is present here. If we look at our fish and its digestive system from the perspective of its volumetrics, understanding its total bulk volumes or its total volumetric capacity, the volumetric of the stomach bowl, from the total volumetric of the digestive system, after a contribution intake of 1/8 of the daily and volumetric diet takes us to the next logical scheme. What is not apparent from the schematic is the efficiency in digesting and absorption in the allotted time in 24 hours a day.

Assuming that the food intake, following the actions of enzymes, stomach acids and pancreatic secretions, is brought into a liquid state into the stomach  from where we can imagine a partial or total process of absorption of amino acids, simple sugars and fatty acids. Rightly so we wonder what is the time required for the fish to digest and absorb. We will not take into account the feeding reflex that other fish have when they have a ”full belly” which is rather a reflex mechanism. Comparing the extremely short length of the intestine of these fish (I could be wrong if I did not know that the gut has an internal part called the ”Valvula Spirala“) to mammals, for example, we found that in some cases (herbivores) the lengths are 20 times longer than the length of the mammal itself, thus exposing the food to a large area of absorption. In our case we have a digestive total length of 42 % of the fish also counting the entire length of the organ called ”Spiral Valvula”. A volumetric of the digestive system from the stomach to the anus of only 1.5 cm3, compared to a volumetric of the whole body of the fish of 200 cm3, as in our example, would indicate a good yield of the digestive system. 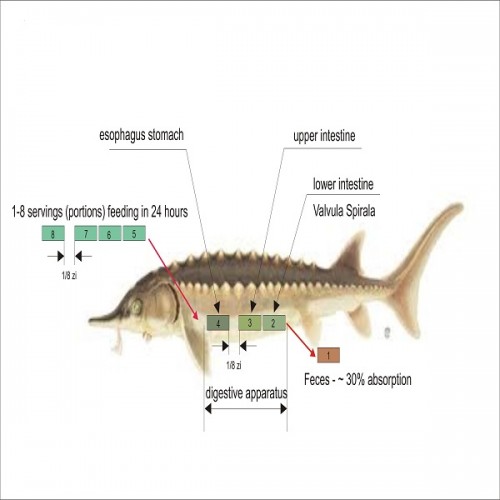 This means that we either experience a lengthy time, since we can not speak of a process on a large surface area, or the process as general yield is low, the absorption is done partially and thus we constantly need intake and output. Digestive Sturgeon System

In another experiment made ​​on the same Acipenser ruthenus species we found that after a feeding that ensures the filling of the pre-stomach bag (the esophagus and the stomach) the fish does not release feces in the next 24 hours. In other words, it did not eliminate feces from the intestine and the Spiral Valvula only when it was fed again and under the pressure from ingesting the new food the evacuation of faeces occurred. A longer time between two feedings rather than the time proposed by manufacturers of food can lead to a better performance in absorption and ultimately a much better yield of feeding. The fact is that the natural environment is not very abundant in food and our fish are always in search of it. Perhaps the portions are very small and the ”lift” of the food is extremely slow thus only defecating when there is an ”overflow“ of food in the fish.Digestive Sturgeon System

As we want to feed these fish intensively in our system, there is a possibility that when the time between feedings is too short we risk of losing a non-absorbed quantity of the already ingested food from a previous feed by pushing it out of the system.

In fact I believe that feeding a little bit at a time, several times a day is indicated for an equal development among individuals especially in the case of a density greater than 20 kg/m2. Also feeding too often is the equivalent of throwing money away because a partially assimilated food will produce large gaps in the system by the large amount of dissolved solids and suspended solids in the system. We will discuss this issue in the next chapter. Digestive Sturgeon System

Our case, due to the reasons given above, does not performs the two assertions: the long time of intake and the large absorption area, remaining for us to understand that we are in the third situation, the situation of partial process of assimilating food, a process that is both counterproductive and uneconomical. Given the economic importance of the cost in terms of feeding, a good understanding of how effective assimilation feeding is is vital. By understanding these physiological and anatomic considerations, we can now rationalize the adaptive mechanical filtering algorithm, which is a consequence of …Digestive Sturgeon System

If you want to use the data and text above to create articles and publish them on another site you need the approval of the author. This material is protected by law. 8 of 14 March 1996 on copyright and related rights.