99.99% of the fish in RAS or traditional aquaculture systems suffer from a form of chronic stress similar to photophobia, in connection with the functioning of the pineal gland that directly influences the endocrine (hormonal) and consequently their resistance to disease and optimal development.

The reason for this form of stress is inadequate lighting. It seems that the lack of general knowledge and lack of knowledge about the physiology and anatomy of the fish make some of the farmers believe that the fish feel well exposed to natural or artificial light of high intensity.

I have seen sturgeon farms with very clean water where the depth of the water was only 50 cm. The fish were being exposed to direct solar radiation. I have also visited a farm where they used multiple mercury vapor light bulbs indoors. Fish are not like humans and therefore can not adapt to high intensities of light for one simple reason: No eyelids, they cannot “frown” and they do not use sunglasses or umbrellas. But let’s start at the beginning.

The fish that we intend to grow in the RAS prefer deep pits down to 8 to 12 feet deep in their natural environment. Whether it is the Danube river or any other river, at such depths only a small fraction of natural light reaches the fish, and that fraction is less than 0.1 %.

It is also good to know that there is a light absorption phenomenon going on in the water, produced by the plant mass, algae especially, and also a phenomenon of converting light energy into chemical energy through photosynthesis.

There is also a process of light “scattering” because of the way the photons meet with the solids in suspension. And not least, we have a selective attenuation depending on the wavelength of the lights components because of the photon’s energy exhaustion after  their collision with the water’s hydrogen atoms.

It is understood that at five feet, even in clear water, infrared rays longer than 700 nm never reach that distance having their energy taken by hydrogen atoms and converted into heat. It is understandable that at four meter the red wavelengths are left behind, just below 700 nm, at seven meters – orange (600 nm), at eleven meters – yellow (530 nm), at 15 meters – green (500 nm) and finally at 20 meters only the blue and violet wavelengths (450 and 400 nm) reach the distance but these are also attenuated a lot. 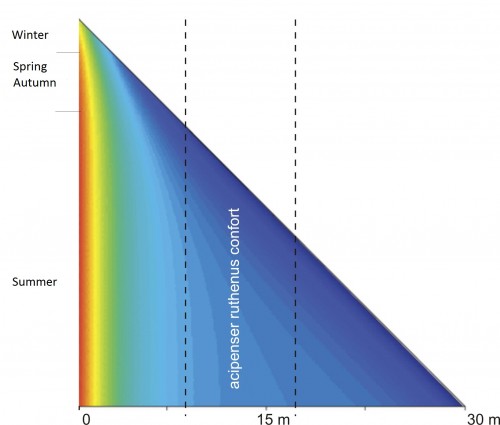 The least attenuated radiations are the Ultraviolet, having the shortest wavelength of all the radiations associated with sunlight.

Finally, it is good to know that our fish do not have color vision like humans do. They do not distinguish colors, only their intensity, or in other words it is possible for them to see in a kind of “radiological white blue”, depending on the contrast to make the differences.

It’s known that the internal organization of our fish’s eyes is different from a human’s by it’s lack of color cones and by highlighting some unique formations such as a reflective layer behind the retina called “tapetum lucidum“. As its name shows, it is a tissue that once more reflects the light that has passed through the retina thereby enhancing the vision of the fish.

In our case, the lighting of the basins will be artificial, taking care of the lighting needs of the species. Observations made ​​in 6 years of intensive growth in two batches of 1,700 copies each showed that a 1% lighting approximately 4.6 lux diurnal and 0,4 lux nocturnal has an impact on the active behavior of the fish, occupying all spaces and horizons of the basin. At this intensity the feeding process is efficient and therefore growth is optimal.

Personally I got 28% additional organic growth with the proper use of lighting compared to a control group.

Another aspect is the use of large diurnal photoperiods which can lead to accelerated fish growth.

Experiences made ​​in collaboration with a prestigious international group of researchers showed that by increasing the natural environment conditions of Siberian sturgeon lots led to an increase of 38% of biomass grown compared to a control group.

These are the arguments by which we developed and use spectral lighting systems based on narrow-band photon emission in our systems. 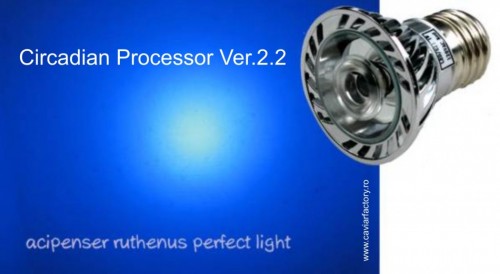 If you want to use data and text above to create articles and publish them on another site you need the approval of the author. This material is protected by law. 8 of 14 March 1996 on copyright and related rights.